Médecins Sans Frontières / Doctors Without Borders (MSF) are speaking out against Nauru detention … and you can join them.

MSF launched psychological and psychiatric services on Nauru in November 2017. Ten days ago, on October 5, the government of Nauru informed MSF that services were “no longer required” and requested that MSF end activities within 24 hours. However, it is clear that MSF representatives have been doing all they can to treat patients who, they acknowledge, need more than therapy to have any chance of recovery. As corroborated by MSF medical analysis, refugee patients are stuck in a vicious cycle of deep despair, with many having lost the will to live. While many of the refugees on Nauru experienced trauma in their countries of origin or during their journeys, the Australian government’s policy of indefinite offshore detention has degraded their resilience and reduced their hope that they will one day lead safe, meaningful lives. Among them, at least 78 patients seen by MSF had suicidal ideations, engaged in self-harm or attempted suicide. Children as young as nine have told MSF staff that they would rather die than live in a state of hopelessness on Nauru and many are now suffering from traumatic withdrawal syndrome, where their status has deteriorated to the extent they were unable to eat, drink, or even walk to the toilet. Dr. Beth O’Connor, MSF psychiatrist, said:

“It is absolutely disgraceful to say that MSF’s mental health care is no longer required; the mental health situation of the refugees indefinitely held on Nauru is devastating. … Our patients often describe their situation as far worse than prison because in prison you know when you can get out. While in my professional opinion there is no therapeutic solution for these patients as long as they are trapped on the island, I fear the withdrawal of MSF’s psychiatric and psychological health care from Nauru will claim lives.“

(You can read a more detailed statement from MSF by clicking here.)

When MSF left Nauru, Australia’s minister for Home affairs, Peter Dutton, wrongly said the organisation had never been contracted to treat refugees. He said there were 64 mental health staff on the island and that his government’s contractor, International Health and Medical Services (IHMS), fulfilled required needs. However, this report reveals that is documentary evidence that detainees who have attempted suicide multiple times within a matter of weeks who IHMS have no power to even refer to supported accommodation within the Regional Processing Centre because that lies with the government of Nauru to whom IHMS must submit applications. 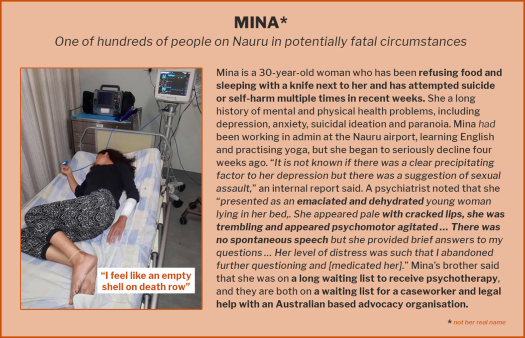 A few days ago (11 Oct) MSF held a press conference where they took the rare and forceful step of demanding that the Australian government immediately evacuate all asylum seekers and refugees from Nauru and the end of the offshore detention policy for good.

The international non-governmental organisation said there was “nothing humanitarian about saving people from sea only to leave them in an open-air prison. … This policy should be stopped immediately and should not be replicated by any government.”

The day after the Médecins Sans Frontières press conference, the Nauruan government accused MSF of conspiring against it and entering the country under the guise of healthcare in order to engage in political activism. (The full statement from the government of Nauru can be read here.) In response, a spokeswoman for MSF said the organisation’s only agenda was “to provide the best medical and mental health care to Nauruan asylum seekers and refugees on the island and alleviate their suffering”.

Médecins Sans Frontières have now set up a change.org petition

So if YOU SUPPORT THE IMMEDIATE EVACUATION OF ASYLUM SEEKERS & REFUGEES FROM NAURU, please sign the petition and share a link to it or to this post as widely as you can.

(All underlined text in the above post is linked directly to source material for more information and factual verification.)