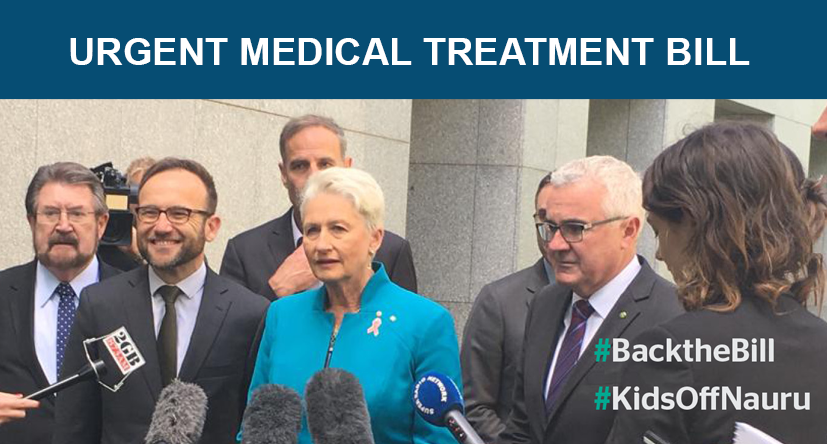 The Urgent Medical Treatment Bill will be introduced to the Lower House of the Australian parliament next Monday (3 December) by a group of crossbenchers led by new MP Dr Kerryn Phelps. Essentially the bill will require the urgent evacuation of any asylum seeker who is ill and unable to be treated offshore, on the recommendation of two or more doctors as well the urgent medical transfer of all children who remain detained on Nauru.

And YOU can use your democratic power to get this bill passed.

Kon Karapanagiotidis, CEO of the Asylum Seeker Resource Centre, has called for all Australians to make one phone call … to a key Liberal MP urging them to support this bill.

As Dr Phelps has stated: “It’s a medical solution not a political solution to a humanitarian crisis” and the UNHCR has stated that the bill represents “a fundamental principle of international law”.

Neither the coalition nor Labor have any justification in opposing this bill – (sadly) it doesn’t change policy on offshore processing and mandatory detention – it ensures the needed healthcare for the people suffering critical and potentially fatal health conditions because of those policies. The least any politician can do is support this bill.

Please read the letter below from Kon and use the links to go the ASRC page to help you make that call. Or two.

It doesn’t take long to express your views respectfully and ask that they be taken into account by those representing the population in political positions.

This could be the turning of the tide.
Empower yourself by taking this simple action. And you could be saving lives with one brief phone call.

There are moments in time that define a nation. This is one of those moments. Dr Kerryn Phelps MP has just announced the Urgent Medical Treatment Bill. This bill is our one chance to change the Migration Act to provide legal mechanisms to transfer critically sick men, women and children out of offshore detention to Australia for medical care.
To make this happen, influential Liberal MP’s need to be convinced to back the bill.That’s why we need you to take urgent action today. Your incredible support has helped us get to this point – making a call at this critical moment to these Liberal MP’s have never been more important.
Call these Liberal MPs now
Offshore detention has made people sick. In just the last two weeks, there were 12 incidents of self harm and suicidality on Manus and the mental and physical health of children on Nauru has continued to deteriorate. The government continues to delay action and oppose medical transfers to Australia for people on Manus and Nauru. This week the Kids Off Nauru community gathered outside Parliament house to hand-deliver 170,000 signatures to MPs Dr Kerryn Phelps, Nick Mckim, Andrew Wilkie, Lisa Singh, Derryn Hinch, Rebekha Sharkie and Tim Storer. Cross bench MPs have formed a coalition of conscience and are delivering on their values in Parliament with the Urgent Medical Treatment Bill.
The turning point we have all been working so hard for has finally come.
Call these influential Liberal MPs now and ask them to Back the Bill.
We need them on board.
We need to show our political leaders  that Australians want an urgent solution  to the medical crisis on Nauru and Manus.
At the rally and press conference, Dr Kerryn Phelps MP said that giving refuge to people detained in offshore processing is “one of the most important issues facing Australian people at the moment.” Andrew Wilkie MP called the policy “an absolute abomination and a black stain on this country’s name.”

This is it. This is the moment.

Call these Liberal MPs now.
Yours in hope,

P.S – The tipping point has arrived – but we need your help to get these men, women and children to safety. Please call these Liberal MP’s – today, if possible.

Just FYI, when an Email Empathy rep called Craig Laundy’s office (02 9715 7444), his staff member was not only receptive, she stated that she felt this bill could be the “turning point” and she expressed thanks to all the people for contacting the office to represent the values that are at the heart of being Australian. Make her day even better – show YOUR values and ask that they be taken into account when all MPs are deciding whether or not to back this bill.
It’s a bill to save the lives of innocent people.
Every MP should stand for that.